By drzoeadmin on August 19, 2013
SPORTS TweetShare 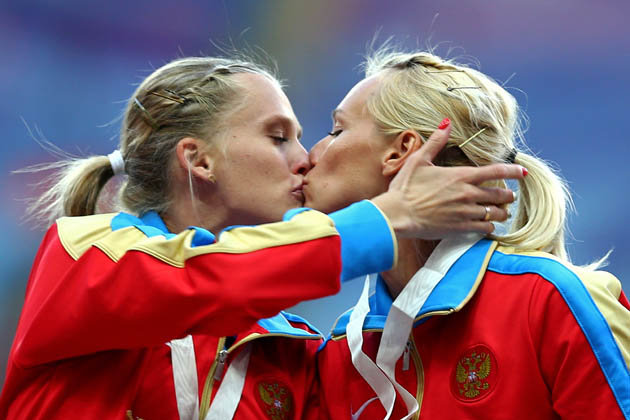 ZoeLena.com would like to applaud these women… Good for you!

Kseniya Ryzhova and Tatyana Firov won a world championship as a part of the 4x400m relay team at the IAAF track championships in Moscow. They edged out the American and British teams for the gold. While on the medal stand, they kissed to protest their own country’s anti-gay propaganda laws.

This isn’t the first protest of Russia’s laws that penalize anyone for talking about homosexuality in front of children, but it’s the most visible one done by Russian athletes. U.S. runner Nick Symmondsdedicated his silver medal in the 800m to his gay friends back home, and Swedish high jumper Emma Green Tregaro painted her nails in a rainbow in honor of LGBT pride.

“We consider ourselves, like normal, standard people, we just live boys with women, girls with boys… it comes from the history,” Isinbayeva said.

Later, she said her comments were misunderstood because English isn’t her first language. She regularly speaks English to reporters.

“But let me make it clear I respect the views of my fellow athletes, and let me state in the strongest terms that I am opposed to any discrimination against gay people on the grounds of their sexuality (which is against the Olympic charter).”

The words spoken by Isinbayeva are not nearly as powerful as the protest of two young women kissing on the medal stand. One of the reasons many LGBT sports leaders are against a boycott of the upcoming Olympics in Sochi, Russia, is because more can be accomplished by LGBT athletes and their allies standing atop the medal stand with pride. Ryzhova and Firov put that idea into action in Moscow.