Bullying In The NFL?!

By drzoeadmin on November 5, 2013
SPORTS TweetShare 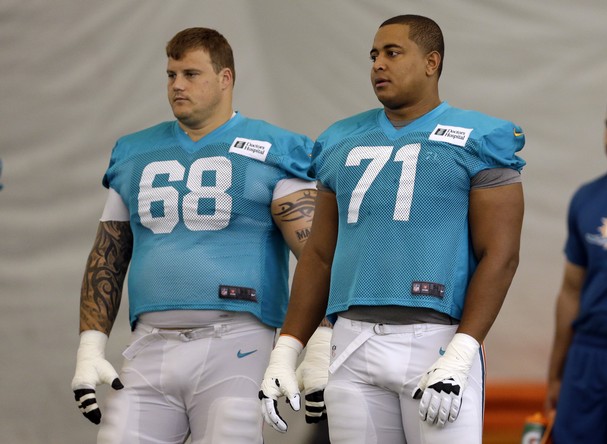 Is anyone immune to bullying?

We hear about it in schools. We hear about hazings in college. We hear about countless women in controlling, manipulative, abusive relationships but now even grown men who technically should be role models in the NFL.

Being a personal confidant, life coach & adviser to leaders in business, politics, entertainment and even having several NFL players as clients, this latest breaking news has hit home.

After researching the history of Richie Incognito, you would think the NFL would have washed their hands of him long ago. While we see people like Paula Dean almost losing her whole empire she built from the ground up for saying “the N word” YEARS ago, this man who gets paid $252,941 per game, calls one of his own TEAM MATES a “half n—–“, threatens to shit in his f—ing mouth, track down and harm his family members and manipulates him in a threatening manner to pay for him and his friends playtime in Vegas?!

No doubt “Incognito”… a monster who should never have the privilege of being disguised in a NFL uniform.

A quick look at Incognito’s history:

According to CBS Sports, Richie was bullied as a child for being overweight. Eventually Richie started fighting back and then became a bully himself. Guess he was never taught that 2 wrongs don’t make a right.

Winner of the Brian Murray Award as the best high school offensive lineman in Arizona, Incognito arrived at Nebraska as a prized recruit and earned a starting job as a redshirt freshman. He started 13 of 14 games at left tackle during the 2002 season. The one start he missed was against Iowa State, when Incognito was forced to sit out the first half after being ejected for fighting in a game against Penn State the week before.

The following spring, before his redshirt sophomore season, Incognito was suspended indefinitely by Huskers coach Frank Solich, for reasons that were never reported.

In February 2004, Incognito was charged with three counts of assault after a fight at a party. He was found guilty on one charge of misdemeanor assault and forced to pay a $500 fine.

Before his redshirt junior season, Incognito was suspended by Bill Callahan for repeated violations of team rules. Two weeks later, Incognito withdrew from the university. He later enrolled at Oregon, but was dismissed from the program after only one week.  That spring, Incognito declared for the 2005 NFL draft.

On Monday, former Colts coach Tony Dungy said on “The Dan Patrick Show” that Incognito was on the team’s “DNDC” list ahead of the 2005 NFL draft, which means, “do not draft because of character.” During Sunday night’s Colts-Texans game on NBC, former Chiefs GM and Patriots player-personnel VP Scott Pioli said of Incognito, “I didn’t want him coming out (of college), and I don’t want him now.”

Despite sitting out an entire season and injuring his knee at the NFL combine, the Rams took Incognito in the third round of the 2005 draft with the 81st overall pick.
During his five-year stretch with St. Louis, Incognito had several run-ins with fans, teammates, coaches, and opposing players. There were reports of fights with teammates during training camp, but most of the controversy around Incognito stemmed from his confrontations with opponents. Incognito’s temperament and style of play earned him a reputation as one of the league’s dirtiest players. Later in the 2009 season, Incognito was benched by head coach Steve Spagnuolo after incurring two personal fouls in the first half of a game against the Tennessee Titans. He was released two days later.

Incognito was claimed on waivers by the Bills after being released by St. Louis. After a short stint in Buffalo, he was signed by the Dolphins in March 2010.

In August of this year, it was reported that Incognito punched a hotel security guard at Liv night club following a Miami Heat playoff game, but later that month, NFL.com’s Jeff Darlington wrote that three witnesses maintained that Incognito was actually attempting to defuse the situation and was the one who reported the assault to police.

Currently Incognito is suspended indefinitely because of his brutal alleged treatment of team member and fellow offensive lineman, Jonathan Martin. Speaking of Martin, imagine working your ass off to pursue your dreams for years through high school, college, then finally making it to the NFL only to have to walk away in order to protect yourself and your family from a bully with rage and anger issues.

Now I know many of you and even some of my own clients in the NFL are going to say things like Martin is too soft. But players go through enough stress and transitions as it is. Anyone who is a leader in life can relate to having to be strong for those around you.  It takes determination and a strong backbone to reach the level of success you desire in ANY arena.

That’s what people like me are here for. To help sort things out no matter what you’re facing. Don’t face your adversities alone. Get some resolve and talk to someone you can trust, knowing it’s 100% confidential.

You can contact me, “The Confidential Coach” at 904.679.5067
Or find out more information about 1-on-1 confidential advising or coaching at http://katapultent.com

Success is a collection of right relationships…