Employees Are More Important Than Shareholders

This approach inspires me and is similar to what my grandfather taught me by example about taking care of your employees. Love creating financial opp 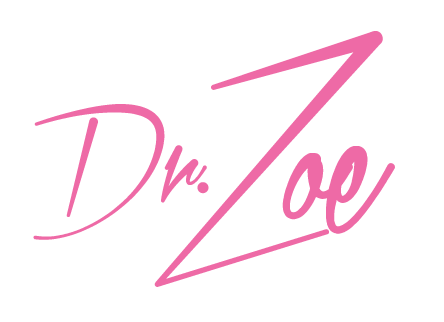 ortunities for people and recently have developed a Katapult Brand Ambassador program that is a very high Commission paying position with bonuses. If you’re looking to make a difference in peoples lives, brands & businesses while manifesting incredible wealth please visit http://KatapultEnt.com/KBA 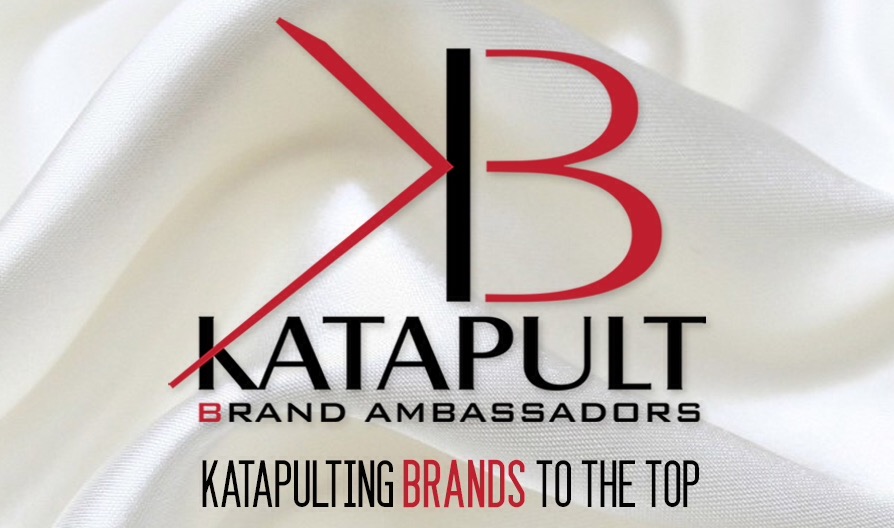 The Buddhist Priest Who Became a Billionaire Snubbing Investors 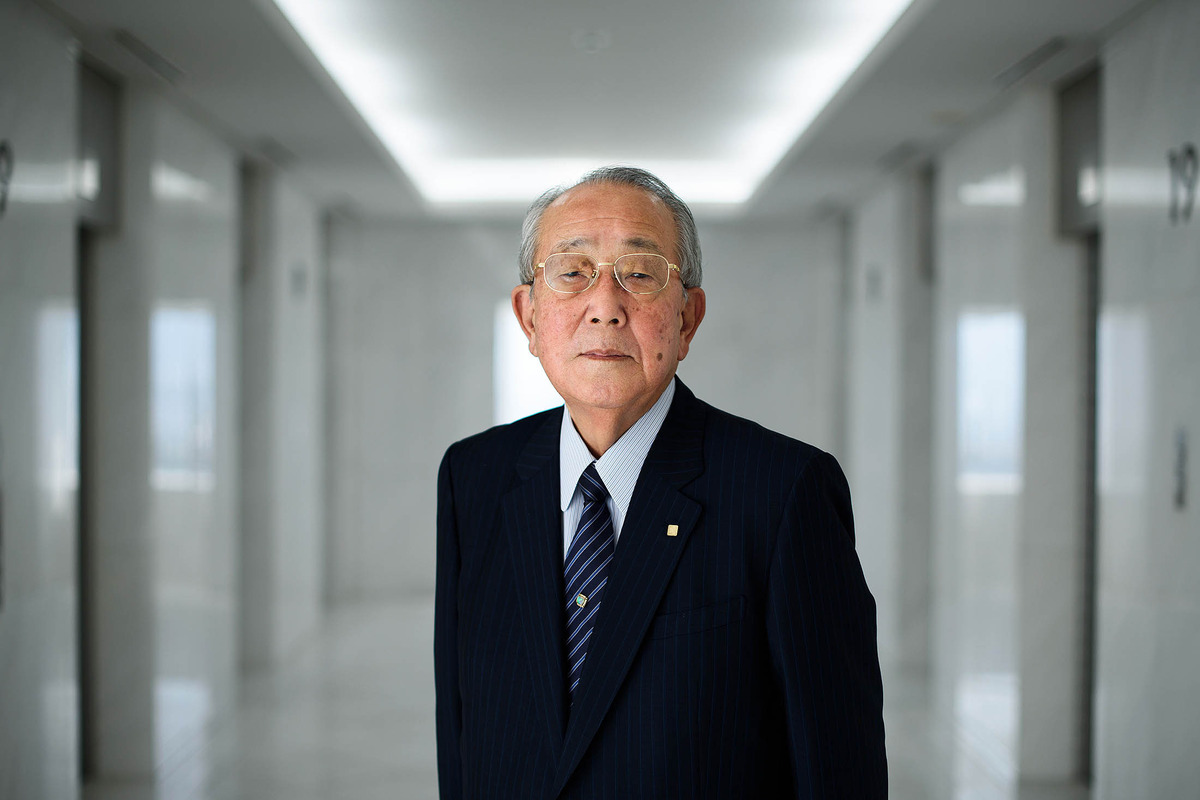 If this 83-year-old billionaire is right, one of the most important lessons of business school is pretty much wrong.

From Kyocera’s headquarters overlooking the hills and temples of the ancient capital of Kyoto, Inamori expresses doubts about western capitalist ways. His views are a reminder that many bastions of Japanese business don’t buy into Prime Minister Shinzo Abe’s plans to make companies more devoted to shareholders.

“If you want eggs, take care of the hen,” Inamori said in an interview on Oct. 23. “If you bully or kill the hen, it’s not going to work.”

It’s a view that carries weight because of Inamori’s success. KDDI and Kyocera have a combined market value of about $82 billion. When Inamori was named chief executive of Japan Airlines in 2010, he was 77 and had no experience in the industry. The next year, he returned the carrier to profit and led it out of bankruptcy. In 2012 he relisted it on the Tokyo stock exchange.

The secret, as Inamori tells it, was to change employees’ mentality. After taking the CEO role without pay, he printed a small book for each staff member on his philosophies, which declared that the company was devoted to their growth. He also explained the social significance of their work and outlined Buddhist-inspired principles for how employees should live, such as being humble and doing the right thing. This made them proud of the airline and ready to work harder for its success, Inamori has said.

The doctrine gained traction, in part because the line between one’s work and personal life is more blurred in Japan than the U.S. Not all of Inamori’s tactics are so spiritual. His “amoeba management” system split staff into often tiny units that make their own plans and track hourly efficiency using an original accounting system. His turnaround also cut roughly a third of the airline’s workforce, about 16,000 people.

“Company leaders should seek to make all their employees happy, both materially and intellectually,” Inamori said. “That’s their purpose. It shouldn’t be to work for shareholders.”

While that might not impress some investors, the man himself sees no conflict. If staff are happy, they’ll work better and earnings will improve, he said. Companies shouldn’t be ashamed to make profits if they’re pursued in a way that benefits society, Inamori has said. He’s the second son in a family of seven children and grew up in Kagoshima, the birthplace of Japan’s last samurai rebellion.

If Inamori’s teachings don’t always follow the typical management grad-school script, there’s no shortage of people wanting to learn them. More than 4,500 business owners attended the annual convention of his Seiwajyuku school in Yokohama last quarter. Inamori said he volunteers his time to speak to attendees, as part of philanthropic activities that also include funding the Kyoto Prize, a Japanese version of the Nobel awards. Beside the Kyocera headquarters in Kyoto stands a five-floor museum dedicated to Inamori’s life and philosophies.

The companies Inamori has led are connected by more than their management approach. Kyocera was the largest shareholder in KDDI as of Sept. 30 with 13.7 percent of voting rights, according to the phone company’s website. The stake is worth $8.2 billion, almost half of Kyocera’s market value. Kyocera owns 2.1 percent of Japan Airlines, data compiled by Bloomberg show

Inamori and his family have a net worth of $1.1 billion, putting them 32nd in a list of Japan’s 50 richest people this year, according to Forbes.

Hong Kong-based Oasis Management is calling on the electronic equipment-maker to return cash to investors by selling its stake in the airline and “greatly” reducing holdings of KDDI. Through Wednesday, Kyocera’s shares had risen 48 percent since Abe’s government took power in 2012, compared with an 84 percent gain for the benchmark Topix index. Kyocera added 1.4 percent in Tokyo today, against a 1 percent gain for the Topix. Return on equity, a measure of the profit companies make from shareholders’ capital, stood at 5.8 percent at the end of September, against an average of 8.6 percent for the Topix.
Highest Returns
Investors “want to get the highest returns possible. I understand that,” said Inamori, talking about shareholders in general. He says the KDDI holding pays good dividends and serves as a buffer against hard times. “At times company management has to say no to shareholders’ selfish requests.”
Seth Fischer, chief investment officer at Oasis, says this is an outmoded way of thinking and ignores the risk that KDDI’s business may founder. His fund is part of an influx of activists encouraged by Japan’s efforts under Abe to make firms more accountable to stockholders.
“We are shareholders, not ‘selfish’ shareholders,” Fischer said by e-mail. “The view that management has a duty to protect the business from shareholders is exactly the behavior that Abenomics is designed to change.”
When Inamori talks about making employees happy, he doesn’t mean they’ll be putting their feet up. His brand of happiness comes from working harder than anyone else. It’s infused with the Buddhist idea of “shojin,” elevating the soul through devotion to a task. In a 2004 book on his philosophy, he questioned Japanese people’s increasing tendency to value leisure time. 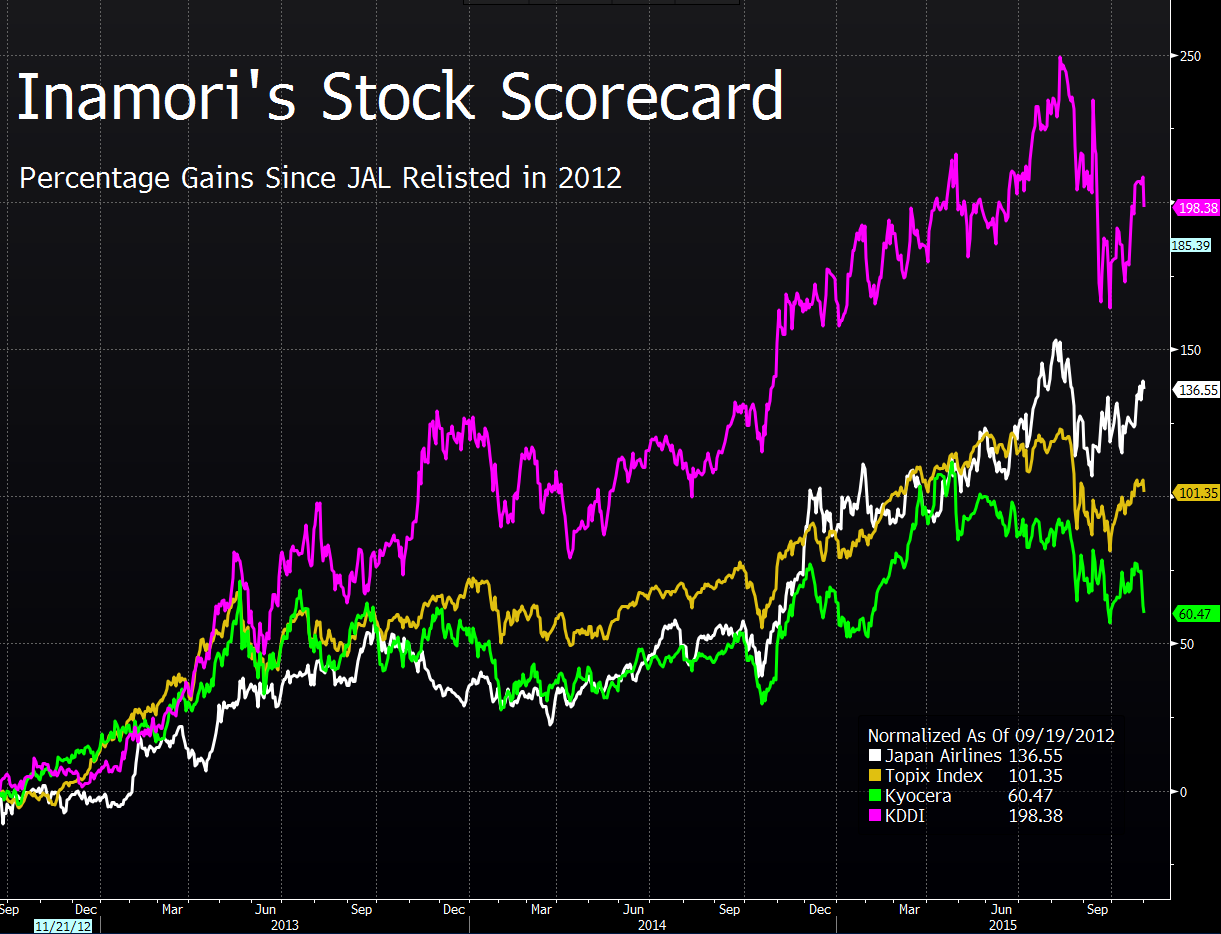 Inamori’s less-extreme capitalism is a product of Japanese society, which he says is less willing to accept gaps between haves and have-nots than western economies. Executives have to take that into account, he said.
“Companies do belong to shareholders, but hundreds or thousands of employees are also involved,” Inamori said. “The hen has to be healthy.”